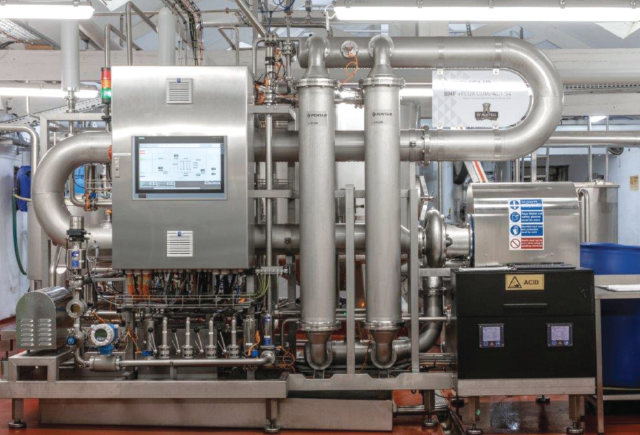 As it approached its 150th anniversary in 2001 St Austell remained a dedicated purveyor of cask ale, brewing three times a week and producing around 16,000 barrels (26,200 hectolitres) annually. And it was a largely unautomated brewery, one dependent on the variability of manual processes.

Today, almost 20 years later, the story has played forward at pace. Under the leadership of brewing director Roger Ryman, St Austell has also distinguished itself from its regional family peer group by acquiring a near-by craft operation, Bath Ales, in 2016, subsequently announcing plans for a greenfield 60,000 hectolitre brewery that began production in May 2018.

None of this would have been possible without investing in the brewery and, when possible, preferring the latest in brewing technology. For St Austell high on their must have list was membrane filtration. It had been on Ryman’s radar for some time, with neighbouring cider makers making use of the technology for years.

In 2017, Pentair brought to market a BMF range with hourly capacities between 60 – 85 hectolitres designed for brewers with annual outputs as low as 10,000 hl up to 120,000 hl. Ryman recalls, “As soon as we saw that this was a viable option for us it was something that we were very keen to do.” And so following trials, in early 2018 Pentair’s 60 hl/h BMF + Flux Compact S4 came into service.

For Ryman there are broadly three areas in which membrane filtration benefits – environmentally, with a move away from DE filtration; improved product quality; and accruing process savings, in terms of reduced inputs and operational gains.

Membrane filtration replaced St Austell’s use of a Diatomaceous Earth (Kieselguhr) filter, in so doing offering immediate environmental improvement. Moving to BMF eliminated the oft-times messy requirements for handling powder and the environmental impact and costs of disposing of DE powder. What’s interesting, here, though is that in moving away from DE in Ryman’s thinking that there is a direct gain in product quality. Iron pickup has always been a risk with filter pads,” he explains.
“We’re not getting that; we just think that the beer is cleaner and has a better stability in pack as a result of the move to the membrane.”

With DE filtration St Austell had been using a centrifuge, which meant operating a two-tank system. BMF made it possible to eliminate use of the centrifuge and move to a unitank system, resulting in reductions in processing time, CIP and CO2 consumption, with the CO2 having been used to displace tanks on transfer.

With St Austell not pasteurising its kegged and bottled beers, use of Pentair’s BMF has also resulted in substantial gains in final filtration.

“One of the big advantages that we have seen with the crossflow is an improvement in the life of those cartridges, almost double in fact,” reports Ryman.