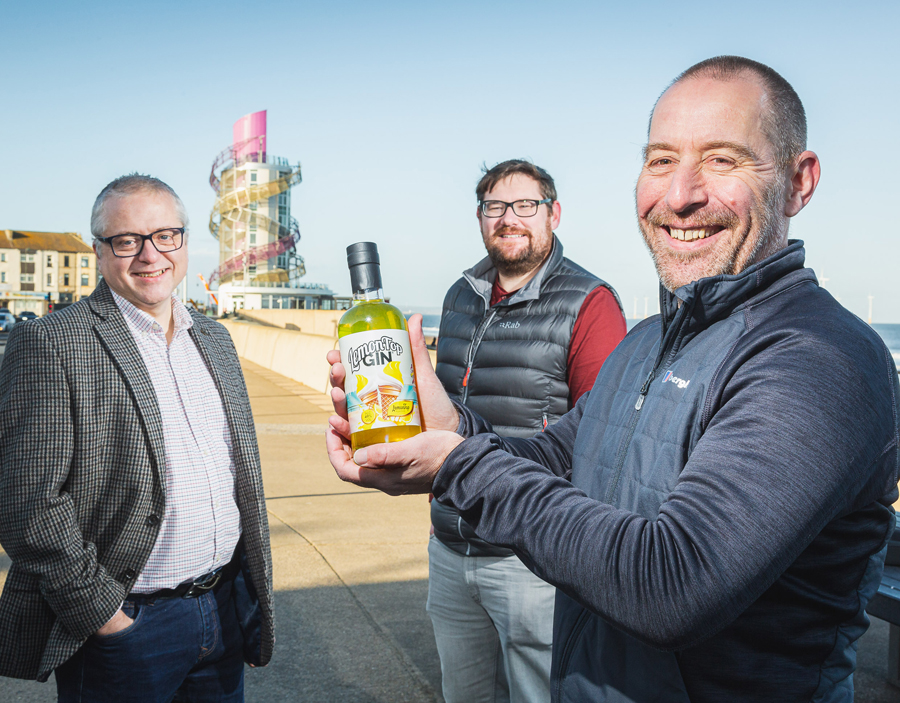 A successful creative design studio that doubles up as a distillery is not the most common collaboration.

But it’s going down a treat in Redcar – and enquiries are now coming in from Australia too!

Friends and colleagues, Arron Stoutt, Andy Mogg and Steve Gill all grew up in the North East and now work together as graphic designers specialising in drinks marketing. Now they’ve taken their business a step further and produce the drinks too!

The three pals chose their company name (LemonTop Creative) because when they were younger they all loved the delicious, traditional lemon-top ice cream produced mainly in Redcar and on the North East coast – an ice cream cornet topped with a generous dollop of lemon sorbet.

And now in a bold and unusual bid to recapture those heady days, they’ve put their money where their mouths are – literally – by setting up a distillery, as well as running a design studio. They now produce a more adult, zingy, boozy version of the lemon-top ice cream – LemonTop Gin!

Arron says: “As huge fans of North East nostalgia, our fabulous coastline and lemon-top ice cream, we talked long into the night about creating a drink that would evoke the sights, noise and emotions we had experienced as kids at the seaside. There’s nothing more exciting and reinvigorating than the sounds, smells and tastes of the British coast. We decided that to be authentic, our drink had to capture the essence of our favourite ice cream.”

It took almost a year to perfect the recipe and involved tasting trips across Europe during 2019 to find the very best lemons. Arron, Andy and Steve were surprised by how much difference the variety of lemons made to the flavour of their drinks. In the end, by far the best lemons to evoke the flavour and memories of lemon-top ice cream were the lemons of Italy’s Amalfi Coast. These are unusually large, intensely fragrant, and grown on cliff-side terraces. Some people even like to eat them raw, like oranges.

Traditionally hand crafted, LemonTop Gin has zesty citrus notes and a delicate smooth finish. With just a hint of vanilla, reminiscent of the lads’ favourite ice cream, it’s the lemon sorbet that shines through, fresh but never overwhelming. LemonTop Gin also packs in a punch at 40% proof.

Steve says: “We wanted to create a gin with flavours that helped people to recollect happy memories of warm, sunny holidays and walking barefoot on the beach without a care in the world.”

According to Andy, LemonTop Gin goes exceedingly well with Cream Soda which makes it tastes like a delicious, intoxicating ice cream – or equally with Ice Cream Pale Ale – as well as any of the conventional mixers like tonic, orange juice or lemonade.

As specialist drinks marketeers, LemonTop Creative have naturally designed all labels, point of sale material and website for LemonTop Gin.

Find out more and buy LemonTop Gin from here: https://www.LemonTopgin.co.uk/